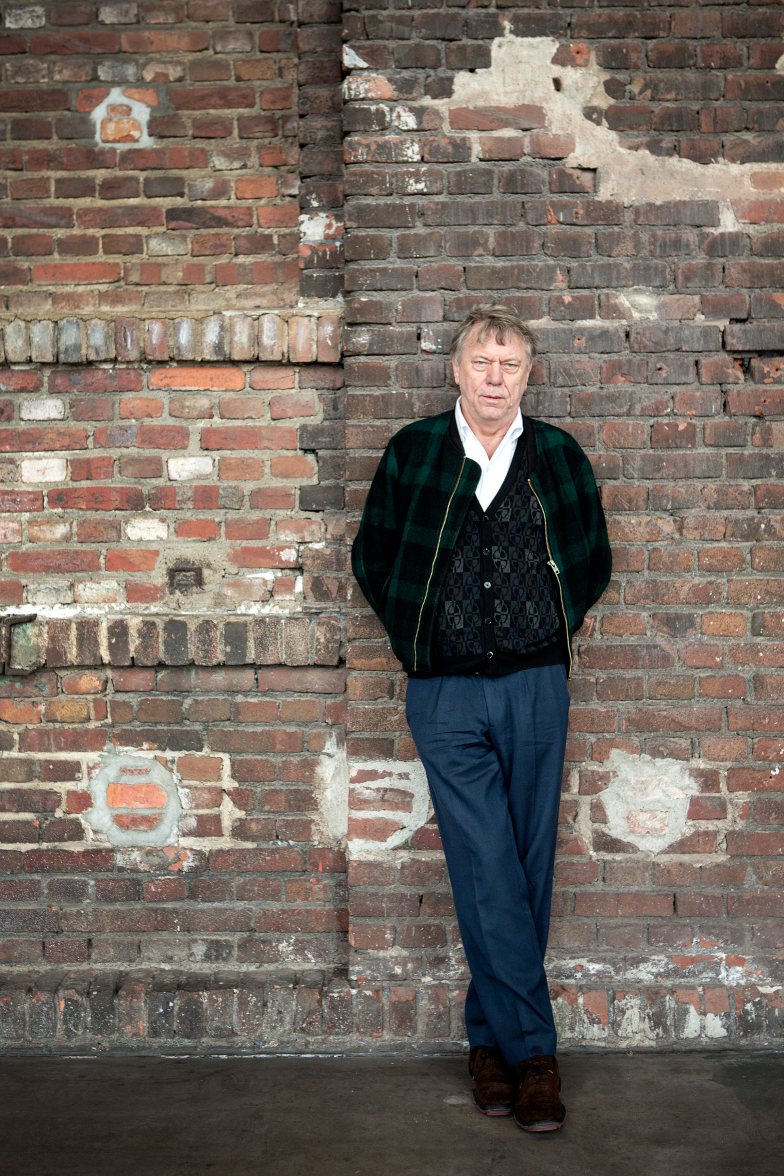 Johan Simons was born in 1946 and grew up in Heerjansdam in Holland. At the age of seven he lived through the disastrous floods of 1953: an experience which has influenced his entire artistic career. After training as a dancer at the Rotterdam Academy and as an actor at the Theatre Academy in Maastricht, he became an actor and director of The Hague Comedie in 1976. This was were he directed his first production.

In 1985 Johan Simons founded the theatre company Hollandia together with the composer and percussionist Paul Koek. Hollandia produced and performed productions far from major theatrical centres, in out of the way provinces, in the countryside, in empty factories, stables and churches, in car breaker’s yards and under bridges, predominantly in the province of Northern Holland. Simons and Koek focussed on directing rural plays by Franz Xaver Kroetz and Herbert Achternbusch, Italian stories by Pier Paolo Pasolini and Luchino Visconti and Greek classics. In 2001 Hollandia merged with Het Zuidelijk Toneel in Eindhoven to become ZT/Hollandia, one of The Netherlands’ largest theatre companies. Johan Simons became Artistic Director, Paul Koek was director of the Veenstudio,an experimental music laboratory. Major ZT/Hollandia prodcutions included ‘The Leenane Trilogy’ (2001), ‘The Bacchae’ (2002), ‘Sentimenti’ for the Ruhrtriennale 2003, and their farewell production ‘Fort Europa: Song of Fragmentation’ at the Ruhrtriennale in 2005. ZT/Hollandia was dissolved in 2005: Paul Koek ran the Veenfabrik in Leiden, Johan Simons was invited to create a new artistic profile for the Publiekstheater in Belgium. He rechristened the theatre NTGent.

In his years with NTGent (2005–2010) Johan Simons dedicated himself primarily to themes such as power and a new humanity. He directed adaptations of novels by Arnon Grünberg, Michel Houellebecq, J.M. Coetzee and Louis Paul Boon, classics by Aeschylus and Beckett and films scripts by Krzysztof Kieślowski and Billy Wilder. Notable productions included ‘The Asylum Seeker’ (2005), ‘Platform’ (2006), ‘I fall ... Fall into my arms’ (2006), ‘Oresteia’ (2007), ‘Ten Commandments’ (2007-2009) and ‘La Grande Bouffe’ (2010).

In 2010 Johan Simons became Artistic Director of the Münchner Kammerspiele. Simons’ productions ‘Cleansed/Crave/4.48 Psychose’ (Sarah Kane) and ‘Die Straße. Die Stadt. Der Überfall’ (Elfriede Jelinek) were invited to theTheatertreffen. In Munich he staged numerous other works including ‘Winterreise’ (Elfriede Jelinek), ‘And The Ship Sails On’ (Luchino Visconti), ‘King Lear’ (William Shakespeare), ‘Uncle Vanya’ (Anton Chekhov) and ‘Danton’s Death’ (Georg Büchner). In 2013 Theater heute magazine voted the Münchner Kammerspiele “Theatre of the Year”. He was awarded the German Theatre Prize ‘Der Faust’ in 2014 for his production of ‘Danton’s Death’ at the Münchner Kammerspiele. In the same year he receives the Berliner Theaterpreis. For his services to theatre in his own and other countries Queen Máxima presented him with The Netherlands’ highest artistic honour, the Prins Bernhard Cultuurfonds Prize in 2014.

Johan Simons is Artistic Director of the Ruhrtriennale 2015 – 2017.