The Belgian musician and artist Peter Jacquemyn is a leading figure of the international improvisation scene. His many-facetted artistic œuvre comprises drawings as well as sculptures and music. At the Ruhrtriennale 2015 he will appear with violinist Gunda Gottschalk, tubist Carl Ludwig Hübsch and the visual artist Sigrid Tanghe. We asked him some questions about his work…

Ruhrtriennale: “Wie die Orotschen sagen” is the title of your concert at Ruhrtriennale 2015. Can you tell us more about this title?
Peter Jacquemyn: The basic idea for this performance comes from a myth by the Orotschen, a small indigenous group of people in Russia’s Far East, about the beginning of all times, the origin of earth, of life on earth. Almost every sentence ends with 'Wie die Orotschen sagen', 'So say the Orotschen.' It becomes a mantra. I like the sentence.

RT: Your partitions look like drawings. Can you describe what your working process looks like – from first sketches to (-) finished piece?
PJ: My partitions are more like a mood board. I try to visualize a multitude of information: what happens, how will the music sound and what feeling will it evoke. I include ideas about light design, eventually text...
These partitions here are the latest version of my daily sketchbook work. Every day brings new ideas turned into drawings, these drawings provoking even more ideas. Drawing is an indispensable step in the associative development of the creative process. To be able to continue the flow, to make the content stronger, to organize the narrative structure, to make things more precise it is absolutely necessary for me to make my ideas more precise in a sketch. Without drawing the ideas might get stuck at the beginning of its evolution.
In my experience, these drawings have also been very motivating for other performers. They see their performance in my drawings. And I love drawing by the way. It gives me peace and power, makes me happy and strong. 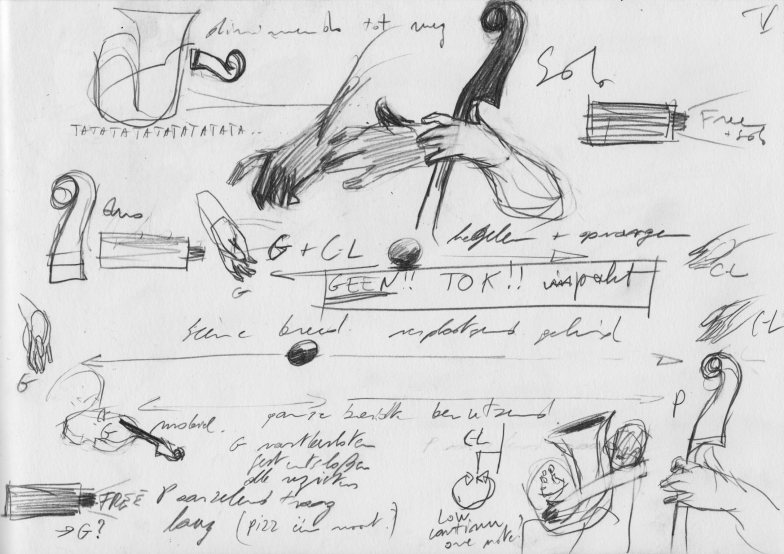 RT: Would you consider yourself as a musician or as a sculptor?
PJ: The difficult question. I can't help it, I do what I do because I do what I have to do, I have no choice.
But I'm very interested in all kinds of things, the origins of human behavior, in prehistoric or so called primitive societies, in all kinds of world music and arts and so on. Drawing and sculpture are a big source of inspiration to me. In a generalized way, one could say that in tribal societies there was almost no specialization in tasks. If you needed a knife, you took a stone and made one. The same was true for music and arts. Every member of a people made their own masks, painted their bodies, and took part in rituals, sang and danced... In those days there were no so called professional artists. That’s how I understand Joseph Beuys’ statement „Jeder Mensch ist ein Künstler.“ Anyway, the body makes a movement, the movement leaves a trace, a sign or a sound. It makes almost no difference to me, the movement is the origin. 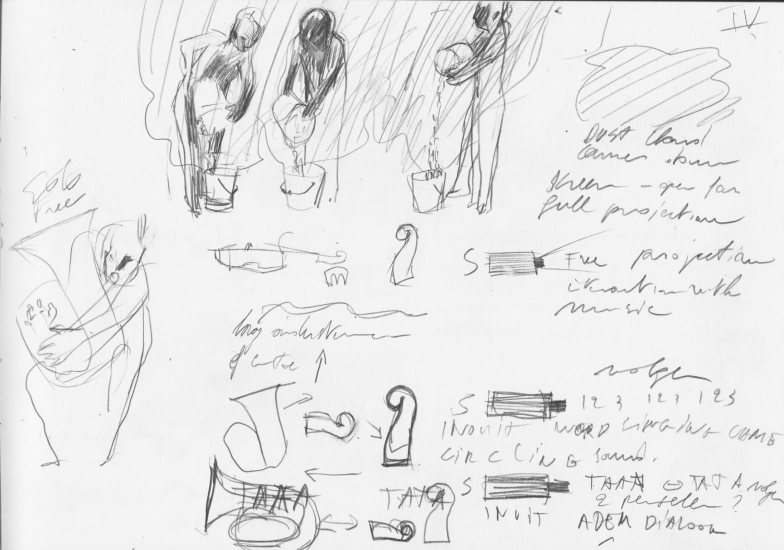 RT: What is your first love – music or art?
PJ: Sculpture and drawing came first. I studied sculpture and never had any music education. Memories of me drawing are some of my oldest childhood memories. Growing up I felt a strong urge to make sound, to make music. So I bought a blues harp, the only instrument I could afford, and started to play in a punk band. Then the bass player left the band...

RT: On stage, you use plastic bags or old cans as music instruments.  What inspired you to use these materials in such a way?
PJ: I never had any music education, so I was forced to find out myself how to play the bass. Because of my lack of any technique I had to find my own answers... Developing your own language, a very personal approach and technique is common business in fine arts. Experimenting beyond the tradition is almost a necessity in fine arts education. That's what I also did in music. I played a lot with very gifted pianists and electric guitarists, being almost jealous about their sound-, dynamic- and harmonic possibilities. I had to develop my own strategy to deal with it, preparing the bass in a way that gave it an almost unlimited wide range of sound possibilities. My bass can sound like a little Tibetan fiddle or like an enormous church-organ... 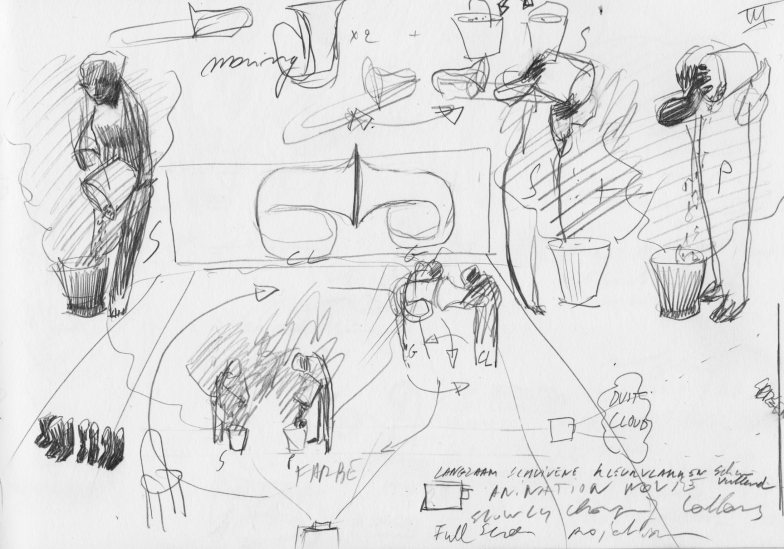 RT: Is there a special person you would like to perform with?
PJ: Work with one person in particular, difficult question.
One of my dreams is to make the stage design for a real opera with my sculptures, drawings, maybe stop-motion animated drawings, costumes. A big Wagner opera would be a real challenge for me.
On the other hand I want to be on stage. I want to play music myself, if possible combined with movement and theatre. I started playing the double bass being largely influenced by the famous Wuppertal bass player Peter Kowald. We even became close friends. He introduced me to some of the Pina Bausch theatre dancers. That’s how performances with former Wuppertal tanztheater people such as Jean-Laurent Sasportes and Geraldo Si came about. Working with the Tanztheater Wuppertal is another one of those almost unfulfillable dreams. Among those is making music for theatre plays or movies by William Kentridge, one of my favorite artists. A collaboration where my music and art are involved, where I’m creating the stage image and performing at the same time, would be perfect. It would really take things a step further.
It’s so difficult to give just one name. I have too many dreams I guess …

RT: Have you been in the Ruhr region before?
PJ: Because of my strong connection to Peter Kowald and the Wuppertal impro-scene I'm quite often in the area. Wuppertal is not the Ruhrgebiet of course, but it's close...
A few years ago I performed live for Johannes Thorbeckes production of 'Philoctetes' in Recklinghausen and a couple of other cities. I remember walking through these abandoned old factories and industrial areas a lot. I love this landscape! It's gigantic and reminds me of medieval castle ruins, forgotten city's taken over by nature again. It's like walking inside one of Anselm Kiefer’s paintings.
Last September I did a solo tour in Germany and played in Essen, Wuppertal, Köln, Bochum, Duisburg, Bielefeld, Münster and Düsseldorf. So yes, I'm familiar with NRW and Ruhrgebiet. I even feel at home here, Wuppertal has become a second home. 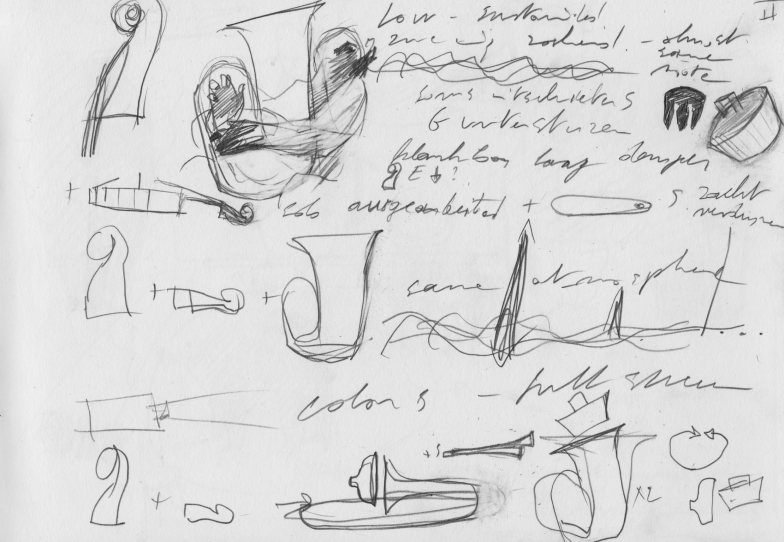 RT: What kind of music do you like?
PJ: More than half of my CD collection is made up of authentic ethnic music from all over the world. Music by the Papua from Papua New Guinea, the Pygmies from Central Africa, Kecak from Bali, Inuit throat songs from Canada and many more. Often music by almost forgotten musical traditions of pushed away minorities and half destroyed civilizations. I'm deeply inspired, influenced and formed by so many so called primitive, tribal folk music. A few years ago I was part of the 'Roaring Hooves' festival in Mongolia and in direct contact with Mongolian music, throat-singing, Morin Khuur, a  Mongolian horsehead violin ... It was a life changing experience for me.
But I also love Jazz. There is a great Jazz tradition, I’m thinking of Ornette Coleman and Thelonious Monk. And I'm diving more and more into New Music. I'm mostly drwan to the music of composers who were also inspired by Ethnic music such as Giacinto Scelsi. 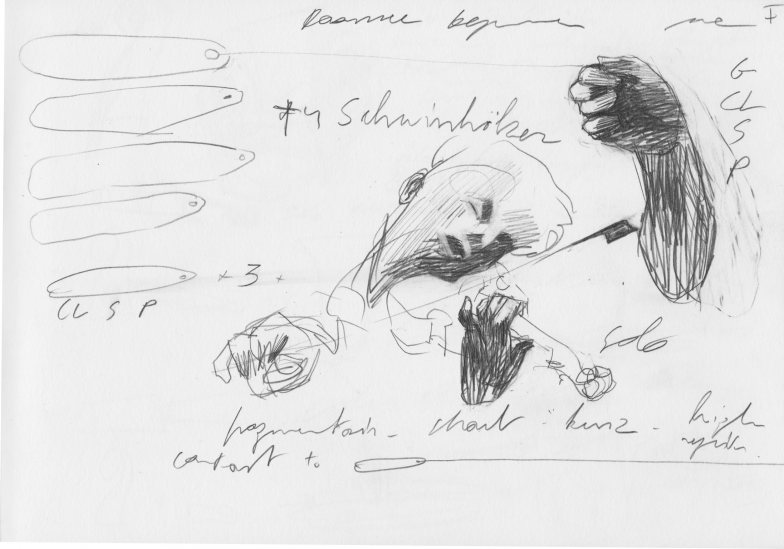 RT: What are you particularly proud of?
PJ: A few years ago, I played the Free Jazz Festival in Prague. After my gig, an old Chicago free-jazz musician told me; ”Hey man, you're crazy! You play this boring, intellectual, European, contemporary, abstract chamber music shit, but you make it swing man, swings like hell your music.” Unfortunately, I don't remember who it was.
Last year I played a gig with Roy Cambell Jr., exciting American trumpet player. After the gig, he whispered: “You're one of us”. A few months later Roy died…
Being appreciated by the old masters of free jazz and improvised music makes me proud, yes, very proud.

RT: What does your preparation for a performance look like? Is there any preparation?
PJ: Visiting a good museum is my favorite preparation for a concert. The Folkwang Museum in Essen or the Museum Küppersmühle in Duisburg, for instance. Warming up and stretching are a part of the preparation routine, of course. It’s like preparing for a sports event. My music is very physical. Then I draw in my sketchbook and eventually get totally relaxed, fully concentrated and very focused – ready for the performance. 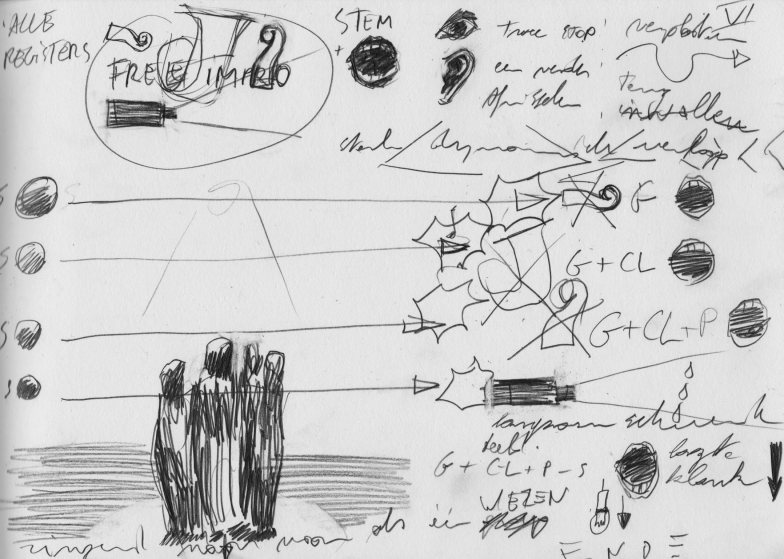 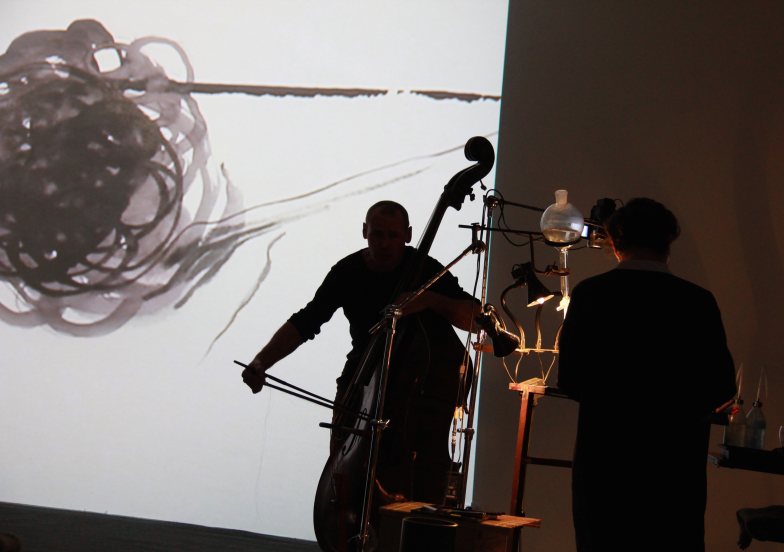