I’m Sonja Vallot, 15 years old and also part of our “Mit Ohne Alles“ theatre company. In our last blog post, Pascal Ulrich already mentioned our trip to Oldenburg. On 1 March, we finally got on the road to Oldenburg. 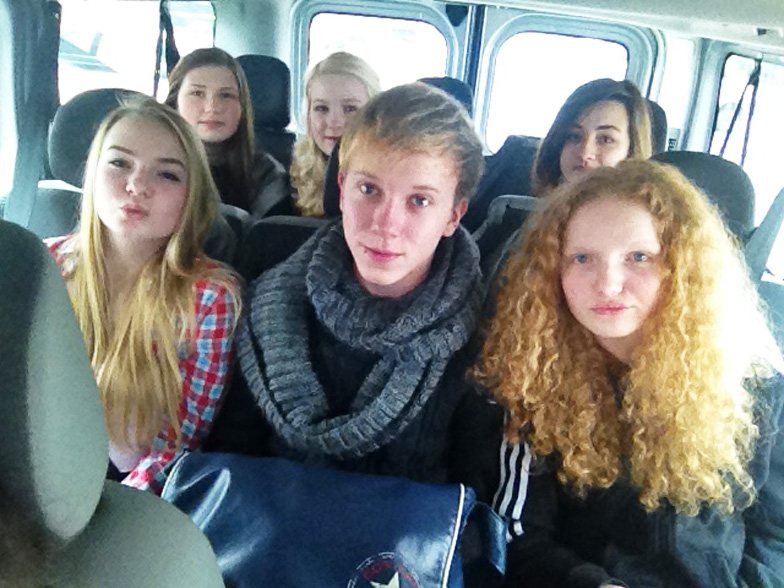 In the packed Ruhrtriennale minivan, we drove to the Theater Wrede in Oldenburg, together with Cathrin Rose, who heads our group, and eight other people from “Mit Ohne Alles”. We took part in the “Conference of Essential Things”, a play by the company “pulk fiction”, in which we could actively participate. At the entrance, we all received a number and then went into the stage space, with a brightly lit table right in the middle of it. Each seat had a little device with loudspeakers on it, from which we heard whispers, giving the numbers to our seats. After some time, we all found our seats. The groups were mixed and we all formed an “ideal family”: regardless of age, children and adults had equal rights.

We had to answer questions using a green or a red button. If the red lamp lit up, we had to take a “call” and the voice on the phone gave us tasks, for instance “Convince an adult that you are better at doing something”, or you had to throw a glass to the floor. Cathrin had to talk to one of the kids about her relationship issues. Somehow a conversation was created that was planned but nevertheless worked out and that was about the same subject as was the Children´s Choice Awards: the relationship between children and adults. Who is allowed to make the rules and who isn’t? We couldn’t solve that question but still had a nice family party afterwards, eating lots of cake with whipped cream.

I had lots of fun! And it was quite interesting, too, since you never really knew what would happen next. On the way back we listened to music and eventually missed our bus at the train station in Bochum …It was a pretty a fun day.

Till then, yours Sonja


Funded by the NRW.BANK.